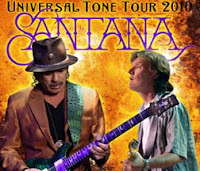 In 1969, young people across the nation were making dire efforts to get their voices heard about the Vietnam War.  No one event was as successful and profound as Woodstock, featuring three days of “fun and music.”  Among the many performers, only one brought the true multicultural flavor of what America was to become 30 years later…Santana.

Carlos Santana, born in Tijuana, Mexico, grew up playing the guitar in San Francisco’s Mission District, becoming the first Latino to establish himself as a modern rock legend.  His guitar rifts are so unique, there is no question to the discretionary ear that it is Santana who is playing.  By producing an original sound fused from African drums, Caribbean rhymes, and American rock, Santana captivated the near half-million concert goers at Woodstock.  Now, after 41 years, the great one returns to Woodstock.

Santana is scheduled to perform on Saturday, July 17, 2010, at the Museum at Bethel Woods, located in part where once stood a makeshift amphitheater created on a small hill on Max Yasger’s Farm.  The 62-year-old Grammy winner will be performing together with Steve Winwood on the museum’s 15,000-seat concert amphitheater, a fraction the size of when he last performed there.

This is part of a North American tour Santana and Steve Winwood are doing this summer.  Upon its completion, Santana will be releasing a new album, “Guitar Heaven: The Greatest Guitar Classics of All Time,” a compilation of many of rock’s major hits including:

The album was co-produced by Carlos Santana and Clive Davis for Arista Records, with tracks produced by Matt Serletic and Howard Benson.  Included is a very special dedication to George Harrison, with “While My Guitar Gently Weeps,” featuring singer India.Arie and master cellist Yo-Yo Ma.

“Listening to the song,” Olivia Harrison told Carlos, “it made me jump for joy and cry at the same time.”

“To create these songs,” said Carlos, “it took an incredible amount of trust – from Matt Serletic, and from Howard Benson, and all these incredible singers, all these incredible musicians, they had to trust me, and I trusted Clive, so it’s a chain reaction of love, because that’s the highest form of love that there is on this planet: Trust.”

“The cuts are special and the guest stars are special,” said Clive Davis.  “But what is unique and why this album stands for more than just the individual songs or titles, is that they were indeed chosen because they’re guitar classics.  And they celebrate the guitar because of the performance of Carlos Santana.”