It's a Latino Halloween, barrio style 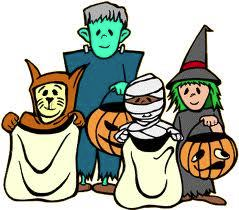 It is probably the sign of the times, but kids don't trick or treat at our house much anymore. Every year there are less and less visitors. This doesn't dissuade us from buying more and more candy. Maybe it is because we installed one of those motion detector lights that only go on when someone comes up the stairs. This year we may disable it so kids can come by and I don't have to eat fifteen pounds of chocolate candy. I only buy the kind of candy that I like, no doubt sublimatin, and over compensating for unfulfilled trick or treating experience in the past.

Back in the day in the Housing Projects, trick or treating was a major event. My brothers, sister and local apartment mate homies would go out as a group and quite methodically work the community. After an hour or two of warm up trick or treating around the projects, we would get an adult to drive us to the better neighborhoods to really rack up on name brand candy, because the treats back home were often weak. Project folk would try to pass out whacked stuff like homemade pan dulce, lumpias, cheese sandwiches, poker chips, and dice.

More savvy projects parents, ours included would sometimes send the kids out earlier to gather goodies, then when local kids came to the door would give them the lousy treats they gathered but didn?t want, like ABC gum, unwrapped candy with lint on them and throwing apples.

Every year I had the cheapest black cat costume imaginable, consisting of a mask with a rubber band and a black hospital gown thing. This "Fit" was one step above drawn on mascara stripped whiskers and hair spiked up with Dippity Do. No matter which house we would go to, I'd would get the same reaction, in several different languages "What is this kid a Beaver, a Muskrat, a Weasel?" Our knock on the door speech became rote and dispassionate. I would try to say "Trick or Treat, I'm a black cat," but since the mask muffled my speech, they often time mistook me for being "Challenged Kid" and gave me a little extra for trying so hard.

Fortuitously, pretending to be stupid has served me well throughout the years.

My family's trick or treating style was quite dichotomous. My older brother would say something like, "Good evening this is a non-threatening, non-invasive trick or treat, and he is apparently a Black Cat with some hygiene issues." My younger brother who was always the cutest of us all would say, "Trick or Treat, candy or money, and I'm dressed up like yo mama."

Our parents were very liberal when it came to our candy. Their philosophy was that if we earned it we can keep it, just as long as we broke them off a little something-something when we checked out our stash. Dad would always get first dibs on the caramels and Mom would take anything she wanted, and that was fine with us.

I maintain the philosophy of laisez faire when it comes to a child's sovereign acquisition of candy. If you can get it, you can keep it. Many seasoned trick or treaters went on to become mega vacuum cleaner salespeople, and or ranking religious zealots.

My wife and I however differ. Her attitude is to save the candy for the kids and give them one piece a day after a well balanced dinner. This socialistic type of thinking severely undermines the drive and the motivation of kids trying to "get paid."

Speaking for myself, remembering my demeanor as a raggedy shot to the curb, jackal-rat faced dork monkey looking challenged cat in prison pajamas. If Mom and Dad held our candy in trust, OK hostage, then piece mealed out the treats one day at a time, this would have killed our motivation to knock our knuckles raw, climb pyramids of stairs, while carrying a shopping bag full of dreams.

The tradition of kids going door to door trick or treating is passing away because of the times we live in. There are more freaks answering the door then going to the door asking for candy. The time of innocence is gone in America - kids now go with their parents to the mall or to school sponsored harvest festivals to celebrate the day.

Maybe it is better this way. More candy for us.

About Al Carlos Hernandez:
Al Carlos may wear his Emmy tuxedo.
on October 30, 2012