Over 1,500 Prom Dresses Will Be Given Away To High School Students 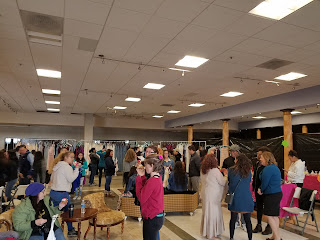 On February 8, 2020, the Vida de Oro Foundation will be giving away prom dresses for the second year in a row, but this year it will include young men’s attire as well.

SACRAMENTO, CA – The Vida de Oro Foundation, a public benefit nonprofit organization, has been informed by Quota International of Oroville and LULUs.com, that they will be contributing 1,700 prom dresses and some new shoes for this year’s prom dress giveaway.

Established in 2016 and best known for producing the annual Sacramento Taco Festival, the Vida de Oro Foundation received over 600 prom dresses last year that were saved from the devastating Camp Fire in Paradise, California. With the help of the media and Sacramento Councilmembers Angelique Ashby and Allen Warren, the Foundation gave away over 500 dresses to young women representing 73 different schools from throughout Sacramento and as far away as Fresno, Oakland, and Corning, California.

“This event creates an opportunity for young women to participate in a very important passage of life, attending their Prom,” says Mina Perez, President/CEO of the Vida de Oro Foundation. “And last year we had many requests from young men, but we were not set up to provide them suits. This year with donations from Armando Flores and CAFFE, and Sacramento KIWANAS we’ll be able to include young men.”

The dresses, which vary in sizes, are donated under the condition that they be given away and not sold. With the assistance of U-HAUL, the dresses and suits will be given away at the former Wonder Bread building located at 1324 Arden Way, Sacramento, CA.

“All students need to be accompanied by a parent or responsible guardian and be attending a high school,” adds Perez. “I firmly believe as this is an American Tradition and no student should be left out from attending their Prom because they did not have the right formal attire.”

Anyone interested in learning more about this giveaway can visit us at www.vidadeoro.org or email us at vida@vidadeoro.com.
on January 13, 2020