Ruth Livier, an ESL kid from a trailer park has become a Web Series Innovator and Webstar Pioneer.

Ruth Livier is not just another alluring Hollywood beauty. She has substance, style, and is an in-demand working actress of stage, screen, and film. Ruth is probably best known for her starring role in the groundbreaking Showtime TV series Resurrection Blvd. and for breaking new artistic ground almost seven years ago when she created, wrote, and starred in Ylse[1], one of the very first made-for-the-Internet series.

Ylse (Ylse.net) won many awards including the first IMAGEN award for Best Internet show.[2] It also landed Ms. Livier on the cover of the WGA’s Written By[3] magazine for becoming the first person to join that union via her work in new media.

“Soy Tapatía,” she told us. “Until I was about seven, I lived with relatives in Guadalajara while my

parents worked in the fields here in California…. Once I crossed to the US and learned to read English, you couldn’t get me out of the library. I was a very serious kid…. Theatre and acting have been a part of my life since my first professional gigs back in Guadalajara. I also love to write…. Writing Ylse and seeing my amazingly talented friends bring my words to life was a fantastic, rewarding, and addicting experience.”

We asked Ruth about Resurrection Blvd. and here is some of what she shared:

“…The show was truly groundbreaking and the people I got to meet and work with were just incredible. I mean, aside from the countless amazing experiences on set, I was invited to the Executive Offices in Washington, DC. There I was, sitting at a conference table with Robert Rodriguez, Esai Morales, and other prominent Latino celebrities while government representatives asked our opinion on the state of Hispanic representation in the entertainment business. For an ESL kid from a trailer park…well, that was one of the best and most surreal moments the universe has sent my way.”

When we asked her if Hollywood still stereotypes she said, “According to every report and study, the answer is still, unfortunately, yes.” 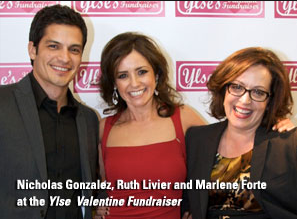 Ylse (Ylse.net) was a pioneering effort. It set the stage for the hit web based programs that seem to sweep the Emmys nowadays. “Our goal was to make something we could all be proud of and my amazing cast and crew, including the wonderful and great late Elizabeth Peña, who directed a webisode for us, did just that. I’m proud of our work on Ylse and I’m excited to bring the lessons learned to the new projects I have in the works.”