Research shows wine consumption among Latinos has increased dramatically over the past five years.
By GOSIA WOZNIACKA, Associated Press
SAN FRANCISCO, CA -- Every night at dinnertime, Jose Placencia clinks a glass of wine with his wife or friends. He loves the taste, the socializing that unfurls and how wine brings out or calms the flavors of Mexican food.
Wine was never on the menu when Placencia grew up in California's Central Valley, where his Mexican-born parents picked crops, including grapes. Today, at Placencia's ranch in the Sierra foothills and in the homes of other area Latinos, wine bottles line up next to plates of quesadillas and carne asada.
"When I was growing up, wine was nonexistent for Latinos," Placencia said. "Now I see it's much more popular. Latinos of my generation have wine on a regular basis and make it a staple of their meals."
Research shows wine consumption among Latinos has increased dramatically over the past five years _ much faster than for non-Latinos. The number of glasses of wine consumed by Hispanics per month climbed by nearly 50 percent between 2005 and 2010, while for non-Hispanics the increase was a more modest 16 percent, according to a study by consumer research firm Experian Simmons.
As Latino consumers are uncorking reds and whites, the wine industry is trying to attract more of America's largest ethnic group. Several winemakers are running media campaigns aimed at Latinos. And the wine trade association in California's agricultural heartland is focusing its upcoming wine tasting and competition on them.
Part of what's pushing the increase in consumption is sheer demographics. Hispanics accounted for more than half of the U.S. population increase over the last decade. The other factor: a socioeconomic and cultural shift among the more established Latino generations. 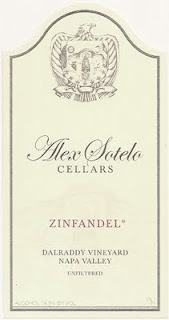 "As the tastes of the Latino consumers get to be a little more acculturated, as their palates change, as they become more affluent and educated, they are turning to wine," said John Hernandez, executive director of the Fresno-based Central California Hispanic Chamber of Commerce.
Hernandez, a third generation Mexican-American, sees fellow Latinos _ who make up 50 percent of Fresno County's population _ enjoying wine at dinner parties, networking events, wine tastings and family barbeques.
"We've gone from wine pickers to wine drinkers," Hernandez said.
Placencia, who was born in the small farm town of Cutler and picked grapes as a child, wasn't exposed to wine until he moved to San Francisco to attend college. There he met people who introduced him to the Napa and Sonoma valleys. Placencia attended vineyard and cellar tours, talked with winemakers and "fell in love" with wine. He even convinced his parents to try it.
The switch was easier, he said, because wine matches perfectly with Hispanic cuisine. Family favorites include enchiladas suizas with green sauce paired with a Viognier; crispy tostadas with ground beef and salsa with a Chardonnay; or carne asada ranchera style with a Serat or a Zinfandel.
"Add a little chopped cabbage and cilantro on top of the beef and it goes excellent with the Serat, it just melts on your teeth," Placencia said.
Despite the growth, industry experts say the Hispanic market is largely untapped.
"We really have not done a good job of translating our product to that demographic," said Peter Vallis, executive director of the Fresno-based San Joaquin Valley Wine Growers Association. "Given the growth of the Hispanic segment of the market, it seems apropos that we find out what these folks want to drink."
Vallis' group _ which represents over half of California's wine industry _ has teamed up with the Hispanic Chamber to put together a panel of Latino judges to help select California's best wines. The results, Vallis said, will help the industry group better promote wine to that ethnic group.
"We want Latinos to have wine with their burrito," Vallis said.
Some wine makers are already working on that.
Napa Valley-based Beringer Vineyards launched a campaign that includes Spanish-language TV spots and educational programs on Latino television networks in Southern California, sampling events and Spanish-language displays in Latino supermarkets and national chains with a large Hispanic customer base.
"Hispanics are one of the fastest growing segments of wine drinkers, so we wanted to introduce our big iconic wine to them," said Francesca Schuler, Beringer's chief marketing officer.
The company didn't just translate its materials into Spanish, Schuler said. Instead, it tailored its message to revolve around family traditions, an integral part of Latino culture.
After a successful pilot this winter _ sales in some stores outperformed the general market, Schuler said _ Beringer plans to launch the same campaign this spring in California and, later this year, in Texas and New York.
Banfi Vintners, an Italian winemaker that exports wine to the U.S., has put up Spanish-language billboards and in-store displays in southern Texas. The campaign was spurred by growth in the largely Hispanic market around Dallas-Fort Worth metro area, said Charles Dellavecchia, director of the Banfi Vintners European Wines Portfolio.
It resulted in a double digit percentage increase in sales and will be expanded to additional markets, he said.
The biggest outreach to Latino wine consumers has come from Latino vintners, said Sandra Gonzales, founder of Vino con Vida (Wine with Life), a Sacramento-based wine education company. Latino winemakers are tapping their neighbors and families, she said, connecting with Latino organizations and educating Latinos about wine.
"Latino wine consumers are taking pride in seeking out Latino wine makers," Gonzales said. "They feel they know their story because it's like their own family history, the immigrant story they can relate to."
Mainstream wine companies have to work harder to make the connection, Gonzales said, including addressing concerns of labor standards, pesticides and wages for farmworkers _ issues from which some Latino wine consumers are removed only by a generation or two. Highlighting Latinos' contribution to the wine industry is also key.
"If it weren't for Latinos," Gonzales said, "would there be a wine industry?"
on June 01, 2011