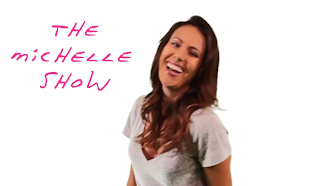 
Michelle could barely walk when her mother, Carmen, put her in her first pair of ice skates. That moment would pave the way for her daughter’s passion to perform. A native of La Jolla, CA, Michelle joined forces with Olympic figure skating coach Yuri Ovchinnikov, enjoying an eighteen-year competitive skating career.
While sports and dance held a big place in Michelle’s heart, her parents stressed the importance of education. She went on to study film and Spanish at the University of California, Santa Barbara where she earned her bachelors degree. During her years at UC Santa Barbara, Michelle took the opportunity to study abroad, living in Barcelona, Spain for one year and traveling across Europe visiting over eight different countries.  It was Michelle’s exposure to the arts from all over Western Europe, along with classes such as Italian and French cinema that had a profound influence, further solidifying her desire to pursue a career in the film industry.
Upon graduating, Michelle moved to Los Angeles, and began training at the American Musical and Dramatic Academy in Hollywood. She immediately landed a job at Universal Studios performing in the Waterworld and Zorro live stunt shows. She quickly booked her first Spanish National Commercial for Allstate, acquiring her SAG card. Other commercial credits would follow including Bud Light (nominated for TBS’s Funniest Commercial of 2010), Mervyn’s, and Banco Popular. She began garnering roles on television including CSI:NY, Parenthood, CSI, The Tonight Show with Conan O’Brien, and All My Children.  Michelle has appeared in music videos for musical giants Fall Out Boy and Bone Thugs N’ Harmony. Her athletic background would also prepare her for stunt work, doubling lead actress Giselle Itie in the Stallone blockbuster The Expendables and In Time starring Justin Timberlake. Michelle currently lives in Los Angeles and continuous to train and pursue her dream.
In 2012, Michelle founded La Gringa Productions and is currently writing, directing, producing, and starring in her own sketch comedy web series, The Michelle Show, due out April 2013 along with producing live action shorts The Beardo and Bloody Cherry.
During her free time, Michelle enjoys painting.  Her artwork may be viewed at www.mrosecreative.com.
on May 16, 2013